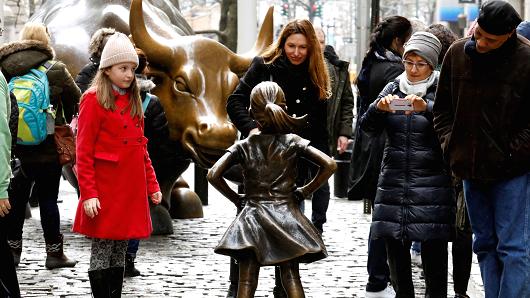 People look at a statue of a girl facing the Wall St. Bull in the financial district of New York. (CNBC)

International Women’s Day is an important event each year. To draw attention to the role of women in the workplace, a Wall Street firm on Tuesday put up a statue of a girl in front of Lower Manhattan’s well-known bronze charging bull, as if to fearlessly stare it down. Much the same as the charging bull, the little bronze girl by artist Kristen Visbal was put up in the wee hours of the morning as “guerilla art”. The bull, sculpted by Italian-born artist Arturo Di Modica, was initially taken down after he quietly placed it in front of the New York Stock Exchange in December 1989. But it was later given a
permanent home, about a five-minute walk away on Broadway, in response to public support.

This appears to be a way of calling attention to the lack of gender diversity on corporate boards and the pay gap of working women. The discourse on gender equity hasn’t translated into action at a broader level in Canada.  By not fairly rewarding the performance of female employees and overlooking them for promotions and leadership, Canadian organizations risk passing up an enormous talent pool, as undervalued women look elsewhere.

Arcus surveyed 455 senior management executives at Canadian public, private and non-profit organizations last month and found that organizations with greater gender equality in leadership outperform those with low gender equality. But to achieve equality at the executive level, women need to be recognized and rewarded for their performance at all levels.

Lets look at some of the statistics:

Contact Arcus for a presentation of the gender equity survey to your management team and to learn how you can deploy a gender equity plan at your organization within your annual HR and Performance Improvement strategy – for your Employees and Board.